Eat Your Stress Away

Eat Your Stress Away

Your heart starts to race, your hands start sweating, your breathing increases, and your mouth goes dry. These are some of the symptoms brought on by the ‘stress response’, a primitive reaction encoded for our survival – ‘fight or flight’ – from an imminent threat, real or perceived. 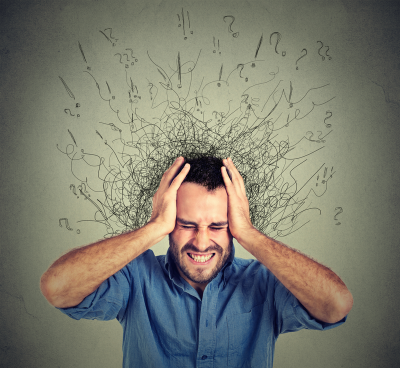 This reaction causes the brain to signal the adrenals to release a cascade of stress hormones such as adrenaline and cortisol, priming your body for action. In small doses stress may be good as it heightens your focus and alertness, motivating you to act, such as giving a speech or waiting for your big race to begin. Once the ‘threat’ has passed, your body typically goes back to a state of normality. However, prolonged exposure to stress can lead to chronically high levels of stress hormones, with detrimental effects to both physical and mental health.

In today’s fast paced society, stress is a normal part of our lives. Ever expanding schedules and deadlines, both at work and home, financial and job security concerns, and the constant bombardment of digital information are just some of the daily stressors we deal with.

Chronic stress can lead to a weakened immune system, digestive issues, heart attacks or strokes, sleep problems, anxiety and depression and other physical and mental problems. As we get older, there appears to be a greater rise in cortisol levels, especially in females, bringing with it higher levels of psychosocial stress, decreased cognitive performance, and a decline of memory-related brain structures. 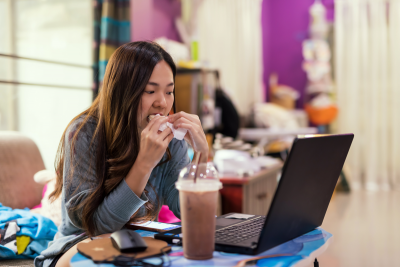 It’s not surprising that our behaviour in response to stress tends to change. Unfortunately this often relates to poor food choices such as fatty or sugary foods. It’s easy to reach for that chocolate bar or packet of crisps from the vending machine, or the delicious doughnut from the bakery, especially when we’re short on time and low on energy. This appears to be linked to the effect of high levels of cortisol on dopamine, a neurotransmitter associated with our reward system and food preferences. These foods may feel good at the time but can leave you feeling lethargic, cranky, and less able to deal with the stress. If this behaviour becomes a habit, weight gain can follow. There is evidence that stress affects the fat storage locations on the body, with greater deposits occurring in the abdomen (visceral fat). Visceral fat is associated with increased risk of cardiovascular disease and type-2 diabetes.

Caffeine is another go to ‘aid’ when we’re tired. However, it’s a stimulant which increases cortisol secretion and contributes to insomnia and nervousness. It also causes reduced magnesium and B-vitamins, some of the key nutrients that help with stress reduction. Instead of coffee, try chamomile tea, which has a calming effect on stress and promotes good sleep.

When we’re stressed, alcohol may seem like a good way to relax and distract us from our worries, however this only provides temporary relief and it can interrupt sleep, which is already disturbed as a result of stress.

So what can you do about it? Whilst food won’t eliminate your stress, it can act to buffer some of the effects of stress and slow down cellular ageing. Maintaining a healthy vitamin and mineral status is crucial for cognitive function and well-being. 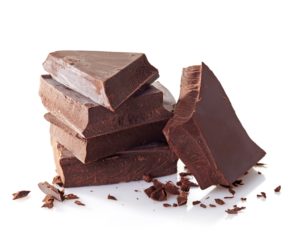 Antioxidant rich dark chocolate is known to reduce feelings of perceived stress and increase feelings of wellbeing, with females being especially sensitive to the stress relieving effects. Savour, but be careful not to overindulge! 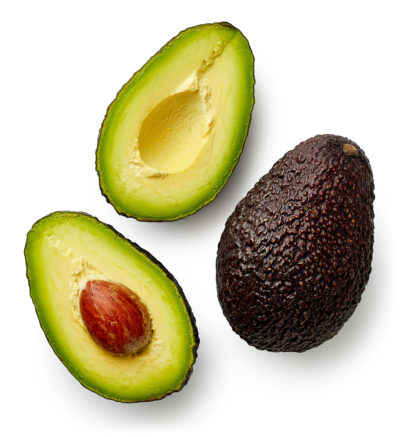 These creamy and highly nutritious fruits are rich in fibre, folate and vitamin B6, as well as vitamin C, magnesium and monounsaturated fatty acids. Folate, vitamins B6 and B12, have been shown to have a direct effect on mood and neurotransmitter regulation such as serotonin and dopamine, as well as being crucial for increased energy. Chronic stress reduces vitamin B6 and a study found that high numbers of people admitted to psychiatric units were deficient in folate or vitamin B12. Sliced and placed on toast, eaten as part of a salad or mashed up into guacamole, avocados are wonderfully versatile. 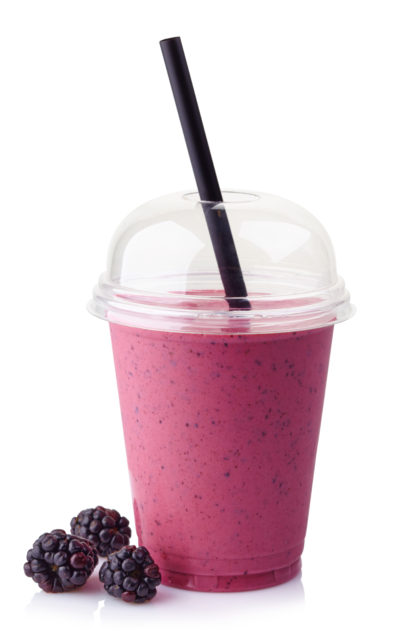 Loaded with vitamins, antioxidants and phytonutrients, a recent clinical trial found blueberries reduced the effects of post-traumatic stress disorder, due to the secretion of serotonin, thereby enhancing feelings of happiness and well-being. Also rich in vitamin C which has been shown to lower blood pressure and cortisol levels, and antioxidants which act to prevent, reduce or repair the damage caused by oxidative stress. Great in smoothies, toppings for your morning oats or snack time yoghurt, or simply popped into your mouth, these mini nutrient bombs pack a punch to offer all kinds of healthy benefits. 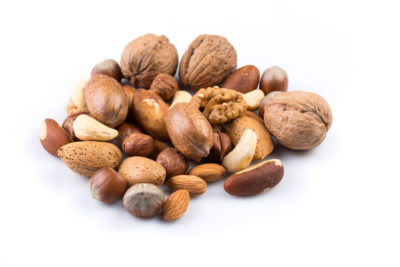 They are nutrient rich, and contains healthy fats and fibre, as well as B-group vitamins, magnesium, zinc and antioxidants. Although high in fat, clinical trials suggest that regular nut consumption is not a likely contributor to obesity and may even enhance weight loss, when eaten as part of a calorie controlled diet. Zinc has been shown to buffer the effects of stress and improve anxiety, mood and behaviour. Pack a handful of nuts such as almonds, walnuts and cashews for your snack box. 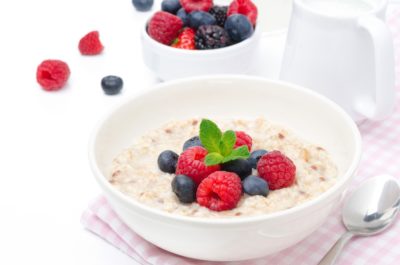 The nutritious plant originated in Asia, with ancestry found in the wild red oat. A slow digesting carbohydrate, high in fibre and antioxidants, oats help to maintain lower blood sugar levels as well as helping the brain to produce serotonin, the ‘happy’ mood hormone. A bowl of oats, topped with berries and chopped almonds and walnuts, makes for a great start to the day. 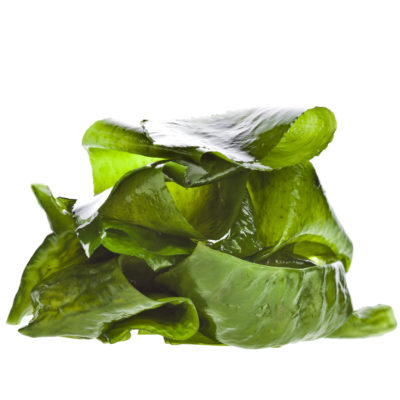 Seaweed contains brain boosting omega-3 fatty acids, folate and magnesium, and it packs a high tryptophan content – an amino acid which is converted to serotonin by vitamin B6, and thought to have positive effects on mood, memory and sociability. Snack on, toss and serve with salads, noodles and soups, or traditional Japanese sushi are just some of the ways seaweed can be enjoyed. 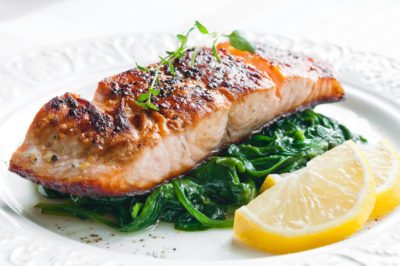 The oily fish is high in omega-3 fatty acids, considered ‘essential’, since they cannot be produced by the body and so must be derived from our diet. Omega-3 fatty acids have been shown to reduce adrenal activation, thus lowering the release of cortisol secretion caused by psychological and physical stress. Salmon, a weapon in our arsenal of healthy foods, is also an excellent source of vitamin B12, B6 and vitamin D, and a good source of magnesium, all of which play a role in combating the effects of stress.

Spinach, together with other green leafy vegetables are an excellent source of magnesium, vitamin C, vitamin B6 and folate, and other stress busting nutrients such as omega-3 fatty acids and zinc. Magnesium, a mineral involved in over 300 biochemical reactions in the body, is sometimes affectionately named ‘the relaxation mineral’ due to its calming effect on muscles and anxiety, and improved sleep. Stress and magnesium have a dynamic relationship in that during times of stress, there is greater reduction of magnesium from the body, whilst magnesium deficiency enhances the response to stress. As ageing is a major risk factor for magnesium deficiency, getting plenty of magnesium rich foods is essential for good health. Cooked or raw, spinach is a versatile leaf that can be easily added into dishes such as salads, soups, or sautéed as a side dish.

With your mind consumed with worry, it can be helpful to embed some easy ‘anchors’ in your day to ensure that you get the foods you need without adding extra stress. Simple planning of a few meals, for instance, oats with chopped nuts and berries for breakfast, a green leafy salad or vegetables with some salmon and brown rice for lunch or dinner, pre-cut (or whole, such as apples, grapes, and berries) fruits and vegetables, and handfuls of nuts for day time snacks, especially during the afternoon slump!

Besides a nutritious plant rich diet, exercise and relaxation techniques such as meditation and yoga, have shown to help relieve stress.

KIRSTY SMITH graduated with a BSc (Hons) in Nutrition and Health from Roehampton University in London, and with a Diploma in Sports Nutrition through the International Olympic Committee (IOC). Kirsty is an Accredited Nutritionist with the Singapore Nutrition and Dietetics Association (SNDA), a member of the SNDA Sports Interest Group and a member of Professionals in Nutrition for Exercise and Sport (PINES). Kirsty has also studied Food Security through Ryerson University, Toronto and is a certified fitness walking instructor.