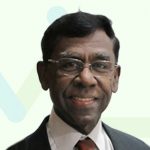 Professor P Ganesan Adaikan PhD, DSc, FIBiol, FIMS (UK) and Diplomate, American Board of Sexology (USA) holds a Master of Science in Medicine for ‘Pharmacology of Human Penis’ from the University of Singapore (1979).

In the earlier years of his career, he was an invited French Government Exchange Fellow at the Centre for Study and Research on Impotence in Paris with Dr Ronald Virag (1985). Through his relentless contributions, Prof Adaikan became a world renowned expert in Sexual Medicine; some of his pioneering contributions include the physiopharmacology of penile erection and pharmacological treatment for erectile dysfunction. He has won several international awards including the prestigious Ginestie Prize, Prague (1986) and Emil Tanagho Prize, Cairo (2006) from the International Society for Sexual Medicine (ISSM), American Medical Systems–Excellence in Impotence Research Best Paper Award, Kuala Lumpur, Malaysia (1997) from the Asia-Pacific Society for Sexual Medicine (APSSM) and the Benjamin Henry Sheares Memorial Lecture Award and Gold Medal (1987) from the Obstetrical and Gynaecological Society of Singapore.

Prof Adaikan was the team lead and head of the Sexual Medicine Section in the Department of Obstetrics & Gynaecology (OBGYN), Yong Loo Lin School of Medicine, NUH and National University of Singapore, foreseeing the academic and research pursuits of his staff and post-graduate students (PhD, MD and Clinical MSc). As a Principal Investigator, he was awarded more than 10 Research Grants amounting to the tune of S$4,000,000/- in the last 15 years, which also include international industrial invitation for drug testing / clinical trials. His noteworthy research led to Singapore and USA patent filing and approval for a pro-endogenous compound in the treatment of Priapism, 09/714,614 (1999, 2003). Prof Adaikan has published more than 200 scientific articles in peer-reviewed journals and over 30 chapters in books; he has also delivered more than 600 invited lectures and presentations in the field of sexual medicine around the world and is a thought leader and consultant to several international drug companies. He has successfully organized and conducted numerous teaching CME lectures, seminars, workshops worldwide and major congresses in his niche area, both locally and internationally.